All heat results can be found here

The Scottish National Surfing Championships 2019 took place on Easter Weekend in Caithness under fantastic sunshine.  This year the event’s main supporters were EventScotland, the Highland Council and the Caithness Collection hotels.  This year the event was officially opened by European Surfing Federation president Huw John. 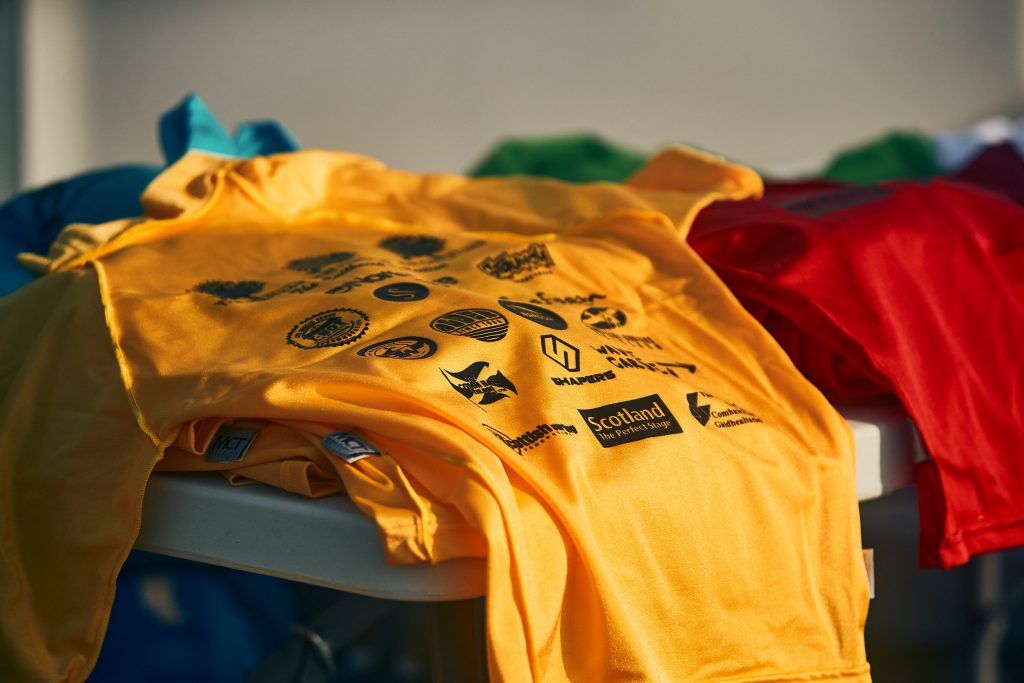 59 competitors participated in what was one of the best ever Scottish Surfing Federation events ever ran with thousands of spectators making it down to see the action over the weekend and enjoy the live and online scoring using the Refresh system, 4-man priority, heat updates and music pumping from the Red Bull event vehicle as well as Red Bull samples being handed out by the Red Bull wings team. 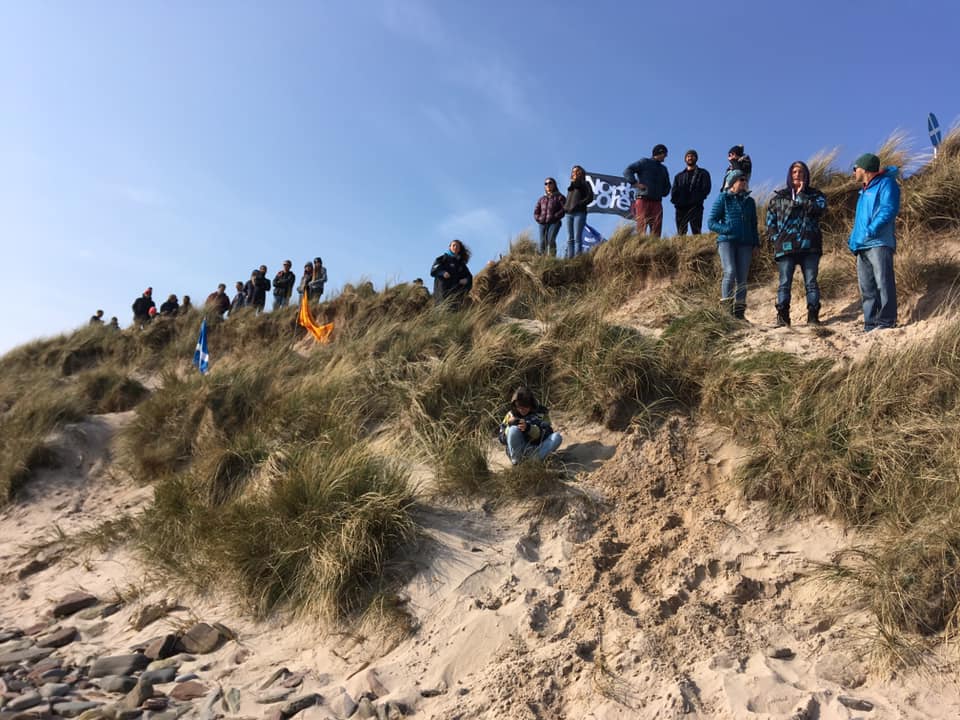 The event commenced on Friday the 19th of April at Sinclairs bay on Caithness’ East facing coast and junior and longboard rounds were completed. Finals of the U14, U16 and U18 Girls divisions took place in the afternoon in waist to chest high surf with light onshore winds. 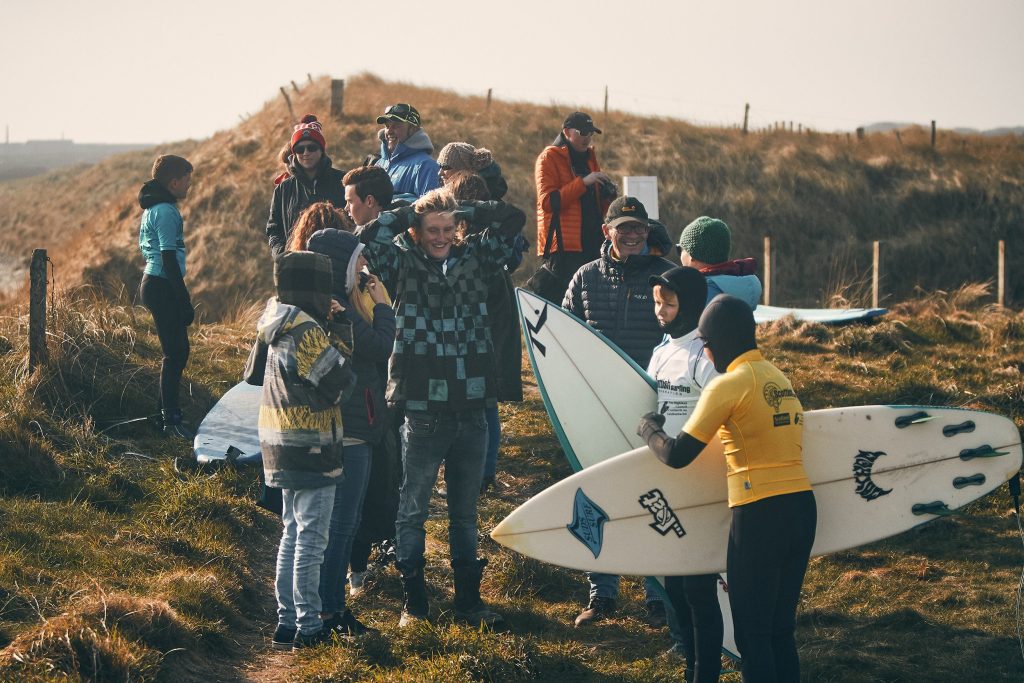 Ben Larg retained his U16s crown with a nail biting final where him and Craig McLachlan exchanged blows.  Ben got off to a solid start controlling the heat with a combination of snaps as Craig looked nervous in the opening minutes.  But Craig would claw his way back into contention with a big layback move to put the pressure on.  Ben beat Craig by 0.24pts with an 11.57pts heat total and was chaired up the beach by Tiree Surf Club members.

Craig McLachlan took the victory in the Narosa U14s division in emphatic style with a 16.16pts heat total in his semi final posting one excellent score and another near exellent then a 12.24pts heat total in the final.  Ben Kobedza did well to give Craig a run for his money with an 8.54pts heat total.

A tight battle also ensued in the U18 girls division this time between Tiree Surf Club’s Robyn Larg and eventual winner Natalie Kobedza with a close first exchange as each girl posted a high 3 but Natalie’s second wave, a 6pt ride, couldn’t be matched by runner up Robyn or either of the North Shore Surf Club girls who were both competing in their first nationals.

Day 2 was a lay-day due to lack of surf but also as the forecast for the following day looked very promising contest director Chris Clarke decided to call the event off for the day.  That evening competitors, members and spectators were invited to a fundraising event in the Pentland Hotel Thurso where Malcolm Anderson premiered his new video ‘Sleepy Hollows’ followed by live music by Donald and Kerry Peace, a raffle prize draw and presentations were done for the completed divisions presented by European Surfing Federation president Huw John and ex British & European Ladies Champion Linda Sharp. 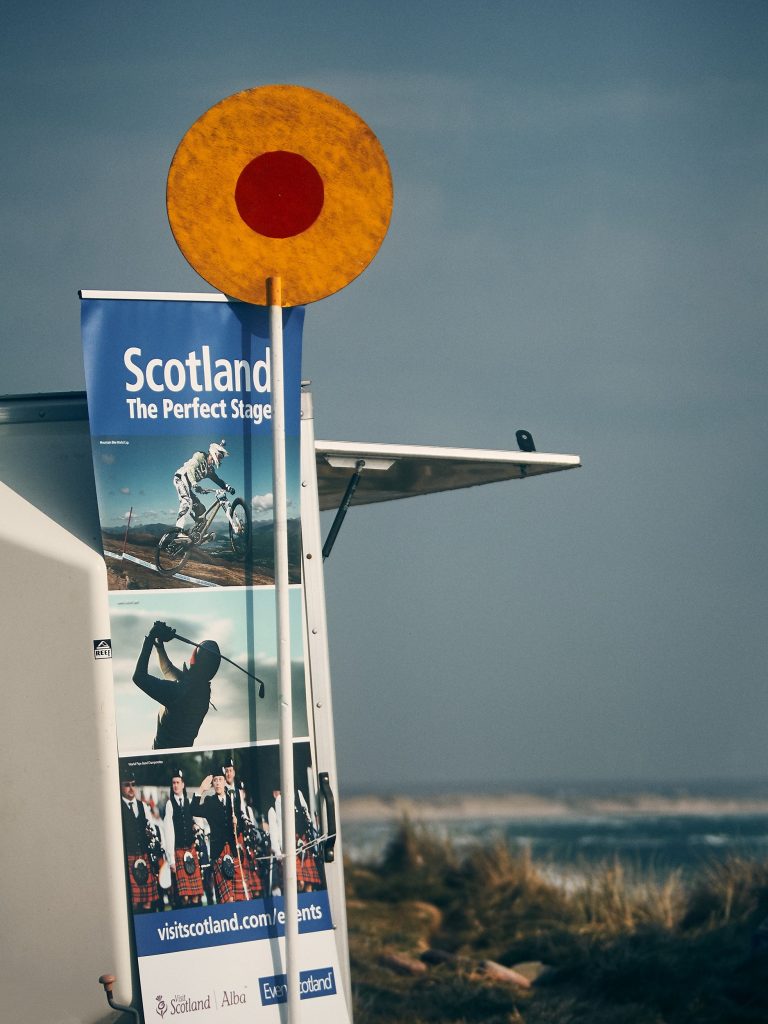 An early call to start on remaining competition at Brims Ness was made and first in the water at the Cove were the U18 Boys semi finals followed by rounds of the Mens Open Division in absolutely pumping surf at the Bowl.  The sun came out and the surf only improved as the day went on and the entire competition and finals were concluded.

After commencing early rounds at Sinclairs bay, 2 days before, the Longboarders were itching to get underway with their final which took place at the Cove – the smaller less intimidating brother of the bowl which allowed for a steep critical drop followed by some traditional longboarding on the 9ft + boards.  Eventual winner would be Malcolm Findlay who had the stiffest competition ever with an on form Chris Clarke who was last year’s winner and has been training hard on his new equipment which was evident for spectators.  Malcolm and Chris both showed off their combination of moves new and old and Jamie Marshall had also been on form in earlier rounds to make it to the final ahead of Frazer Reid.

Mark Cameron dominated the division in what seemed like revenge after Craig Sutherland pipped him to the Masters title last year but also knocked Cameron out in the early stages of the open division in 2018.  But this year there was to be no stopping Cameron as he blew his Masters opponents out of the water with a commanding victory and a 12.93pts heat total, second place was Sutherland with a 5.86.  Well done to James Sutherland and Dominic Duquemin making their first ever Masters finals at the Scottish Nationals.

No surprises as to which boys made the final in the Northcore under 18 boys at the cove.  In the final however, the boys were given the option to surf either the bowl or the cove as the judges could easily see both breaks and spotters were on hand to ensure no action was missed.  Ben Larg was the only boy who opted to surf the more critical break of the bowl and was rewarded for his efforts winning the division ahead of his older club-mate Finn MacDonald who is just back from a year long stint travelling the world. Ben posted excellent and good scores to make up a 14.83pts heat total and Finn’s heat total came in at  7.27pts.

It was a relatively low scoring affair for this year’s Open Women’s division final which was also contested at the cove but Iona McLachlan made the most of the tricky conditions with a heat total of a 7.03pts to pip last years champion Phoebe Strachan by only 0.07 and keep the Women’s trophy in Thurso.  Iona’s second wave a well surfed 4.33 with a couple well connected carves back into the pocket, would make the difference and give her the nod in the judges eyes as this year’s Scottish National Champion.

Early round upsets included a first round elimination for George Watt, last year’s runner up as well as younger up and comer’s Andrew Robertson and Finn MacDonald.  The bowl would be the venue for the Open Men’s division and the waves were pumping!  Bigger than many of the competitors may be used to at this venue as it is usually favoured in smaller swell with more tubing sections on offer but the raw swell served up big faces for carves and turns as well as heavy slabbing sections.

Another standout was Andrew MacLeod who had one of the first round’s better scoring waves for a big hack followed by an inside tube which the judges rewarded with a 6.5.  Chris Noble posted the highest heat total of the entire day in round 1 with a 15.16 and a high wave score of an 8.33 matched only by Boyd in the final.  Boyd and Noble would meet in both the quarter finals and semi finals where Boyd progressed ahead of Noble with double figure heat totals.

Other notable performance was from Doug “the peoples champ” McAlister who made his first ever Open Men’s Final at the Scottish Nationals.  Dougie was consistent throughout the day with good wave selection which proved important in the maxing conditions at the bowl.

As the sun was setting at 20:30hrs the Open Men’s final got underway.  Boyd got off to an early start and put the pressure on from the outset.  Only Cameron would answer back, but Boyd’s last wave, an 8.33 would mean Cameron couldn’t just quite reach Boydie’s score on the last exchange and Mark Boyd would be crowned Scottish National Champion for the second consecutive year with a 14.00pt heat total.

Presentations were done at the Pentland hotel at 22:45pm, in a bit of a rush, due to the late finish of the event on Sunday which made the most of the tide and conditions on that day – an event priority to have the best conditions for the surfers, so hats off to Chris Clarke contest director for making these difficult decisions.

Huge thanks also to all of the volunteers for giving up their time and all of the category and other event sponsors; 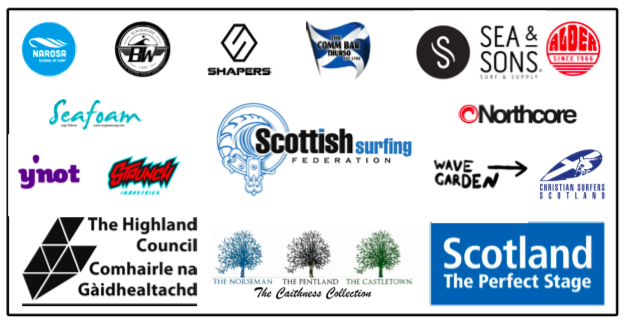 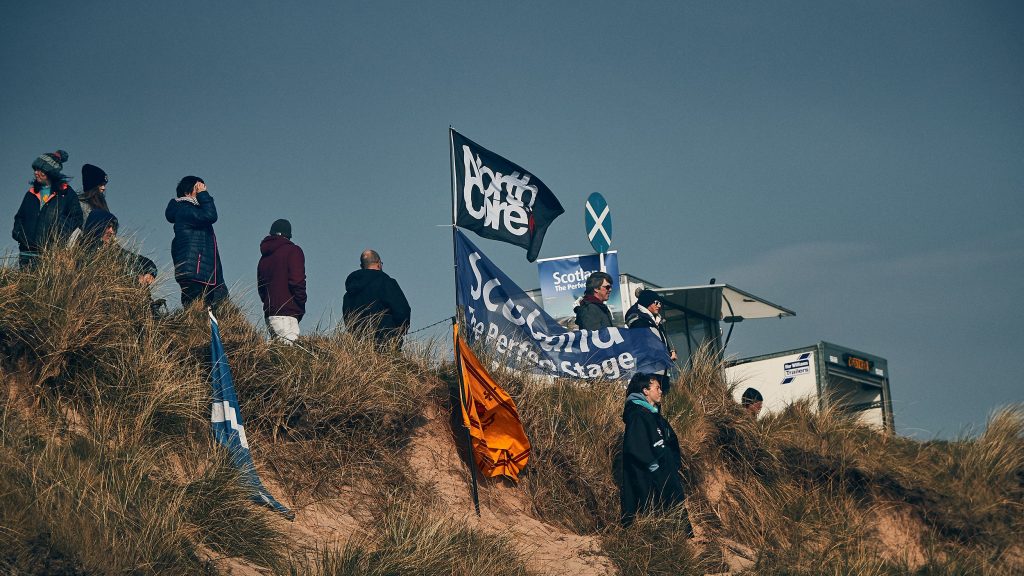 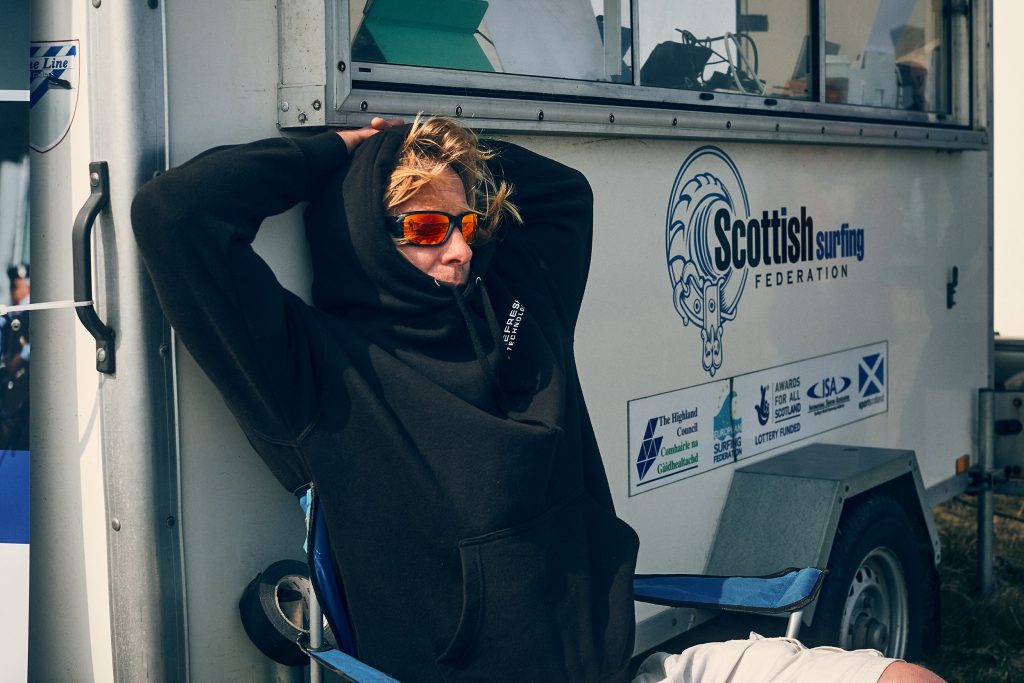 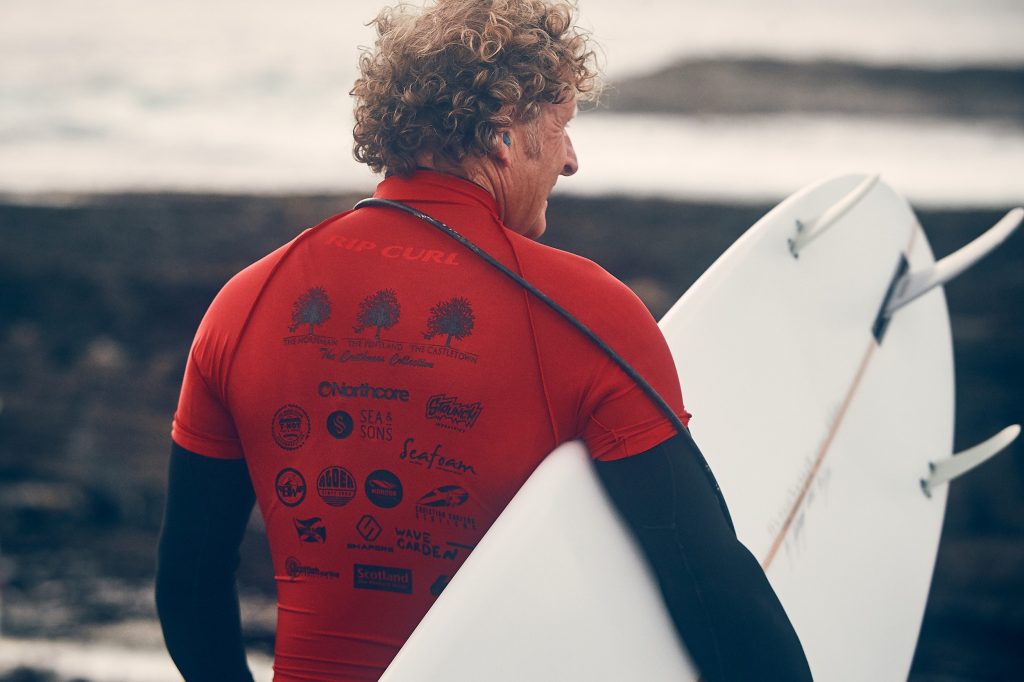 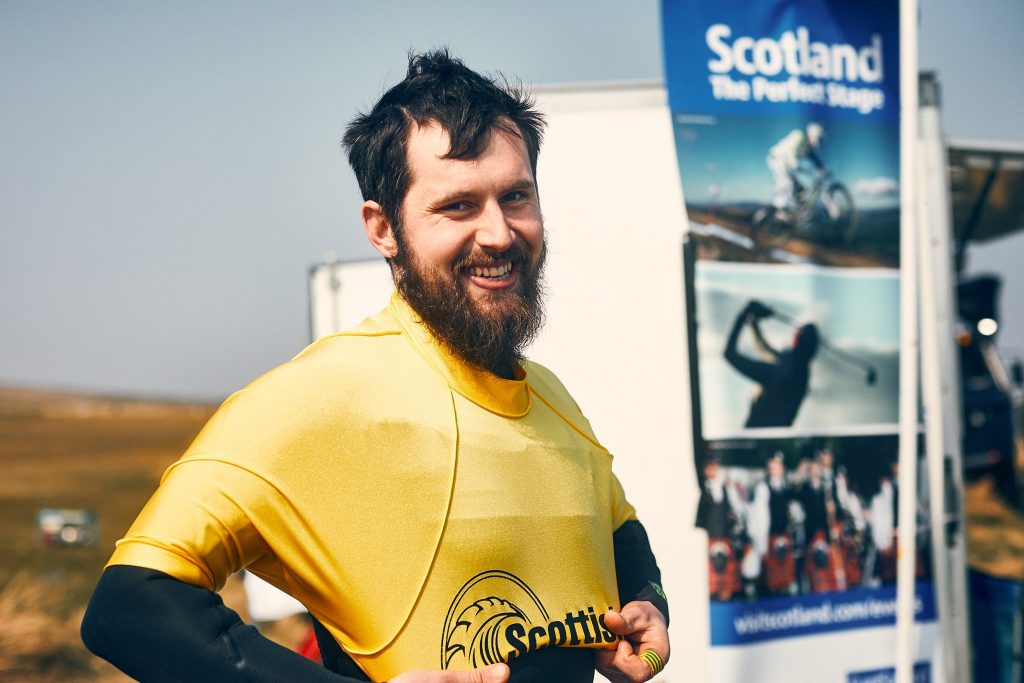 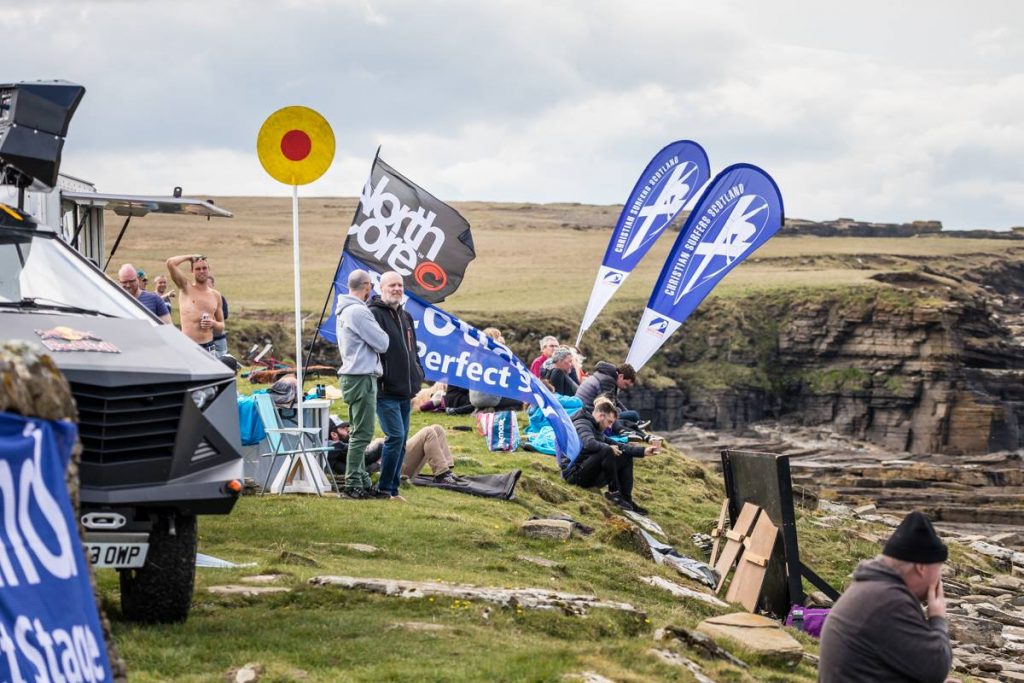