In some of the harshest sea conditions in the world the Scottish Surfing Federation have safely navigated the sport of surfing around Scotland’s coasts for nearly 4 centuries.

There is recognition that many of the learning’s and past history of the SSF have become entrained in those whom have directed, pioneered and steered its course.

This manuscript sets out to document the SSFs course identifying pitfalls, achievements and milestones which have mapped its journey around Scotland’s seas.

The historic account plots the flood and ebb of the SSF over the years with information supplied from Iain Masson, Peter Strachan, Malcolm Findlay, Sam Christopherson and Andy Bennetts to name a few of the early buccaneers.

The more recent history has been accounted for by William Watson and Chris Noble both of whom served at the helm of the SSF committee between 2006 and 2012.

It is hoped such a historic reference may benefit future adventurers and enthusiasts alike, lighting the way to successfully guide the SSFs course in the years to come. Tales of treasure, treachery, bar brawls, looting and other piracy crimes shall remain reserved to the seafarers whom are fortunate enough to have sailed on the voyages to date. 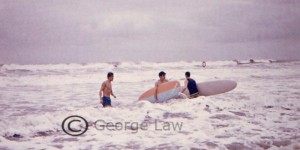 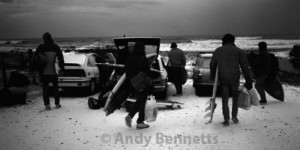 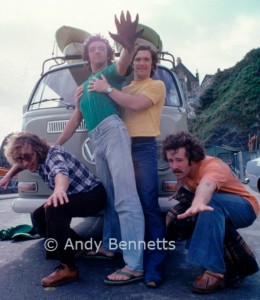 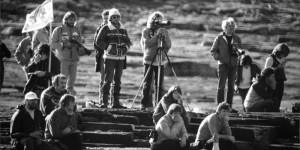 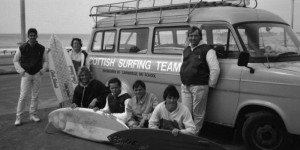 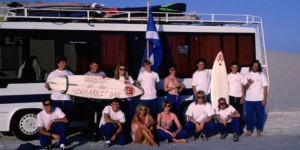 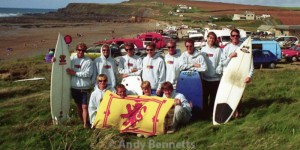 In August 2005 a newly formed surf club in Banff hosted the first Scottish Championship in over 5 years. Due to the swell conditions the Open, Ladies and Longboard events were moved to Thurso and held in 3-4ft challenging surf. The event attracted a lot of attention and it was an excellent opportunity for surfers across Scotland both old and new to meet up.

In a similar fashion that had been noted in the early 1970s. After the Championships many of the surfers who took part from across Scotland re-established common networks. It was agreed by all that there should be a Scottish Surfing Team Event where the Scottish surfers unite, compete, socialize and discuss the future of the sport in Scotland together – and so it was decided to hold “Gathering of the Clans 2005”.

The Gathering of the Clans was created to do just that, unite the Scottish Surfing Communities through a surfing community to decide the future fate of Scottish Surfing. The competition was pulled together at short notice with the help of the ‘Broch Surf Club’ and attracted some 70 competitors from across Scotland, sponsorship was offered directly by Granite Reef who also had built and donated the memorial Highland Quiche for the winning clan.

The meeting held at the Gathering of the Clans event took place in Cheers Bar Fraserburgh (November 2005). William Watson gave the background of the event and outlined what developments had taken place in Scottish Surfing since the 6 years previous. It had been rumoured at the time that O’Neill were looking at holding a World Qualifying Series event in Thurso, at the time there had been no event of such scale held within Scotland. A decision was presented to the surfers at the meeting as to whether the Scottish Surfing Federation should be restarted or closed down completely.

The vote was in favor of the reformation of the Scottish Surfing Federation. Damon Hewlett, Chris Noble and William Watson represting the South East, North Coast and North East regions respectively were voted forward to establish what would be needed to reform the SSF and make contact with those planning to organise the WQS.

The World Qualifying Series event was held by O’Neill in April 2005. In May 2006 the Scottish Surfing Championships were held at Fraserburgh. At the event Chris Noble, Damon Hewlett and William Watson were officially swore in as President, Secretary and Treasurer.

Later that year the Gathering of the Clans event took place in Thurso – a further successfully held and well received contest by all Scottish Surfers present. By this point the SSF was once again water tight and was ready once again to set sail supporting the sport around Scotland’s Coasts. 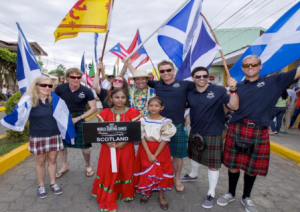 Since 2006 the SSF began going from strength to strength. The SSF have been supporting the Scottish surf communities on a number of areas from beach clean ups, acting as an environmental stakeholder through to youth and surf school development. The two events the SSF aim to hold on an annual basis ‘ The Scottish Surfing Championships’ and ‘The Gathering of the Clans’ have also helped bind the national surfing identity and allowed the SSF to carve out its role as the main focal point for the sport within the country. In 2014 the SSF was formally recognised by SportScotland as the governing body for the Sport within Scotland. In addition strengthening bonds with the ISA (International Surfing Association) and the ESF (European Surfing Federation) the SSF is now leading the way in cold water surfing performance.