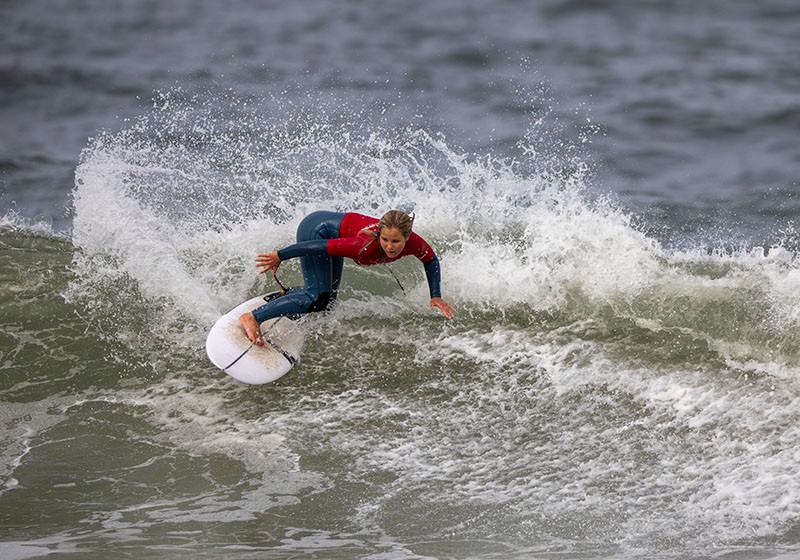 Pease Bay “turned on” with overhead to well overhead surf on the first day coupled with the lowest tides of the year forecast for both days.The swell was scheduled to drop off dramatically on Day 2 and so with a small window of opportunity to fit all 32 heats in with 72 entrants, the decision was made to the get the u12’s in first. After a start in quickly changing conditions and a shift during heat 2 to ‘Little Pease’, the comp was now truly under way, completing both u12 and u14 heats first. Noticeably there was already a significant jump up in the standard from previous years on display.The remainder of the day was held back at ‘Big Pease’; the main competition area where both the u16 and u18’s put on a great showpiece of Scottish junior surfing. As the tide pushed in over the main reef it became clear the conditions were challenging and all competitors were running back up the beach between long rides to use the rip to get back out.The Rights were offering up some of the best waves and some great displays of speed, power and flow were on show as a result.The u12 and u14’s semi’s and finals were pushed back until day 2 and after a quick time calculation, both the u16 and u18 boys and girls semi finals and finals were completed. What a display they all put on! Slashing, wrapping and even boosting above the lip going on, with some great committed first turns, vertical attacks and re-entries on show. Wow!!With the older divisions completed on day 1 everyone headed to the nearby Belhaven Surf Centre in Dunbar for refreshments (food was amaaazing btw!) hosted by Belhaven Surf Club.
The presentations were held for the u16 and u18 divisions.

A later start was most welcome as we waited for the massive tide to drop out and flood back in really quickly over the rocks. It offered up a couple of hours shapely lefts and rights in the middle of the bay over a sand bar. It was only a fraction of the size from day 1, but no rips and glassy 1 to 2ft waist to shoulder high sets it made for some very contestable conditions culminating in over 60 waves being caught in the u12’s final and some competitors even having to exit early as they reached they’re max waves count allowance of 15!!.
The judges had their work out with some very close results and after some time and recounts, the placings were announced, just as the tide filled in.

I would like to take this opportunity give a special mention to Ben Larg who is in his final year as a Junior. What a journey he has been on and it’s been a privilege to watch him grow as a surfer from towing him out behind me as water safety to line up at 12 yrs old and now getting towed in by jet ski into some of the biggest waves in the world. He will be missed on the Junior Series circuit with his battles alongside Craig Mclachlan making some great spectating, while setting the standard for the next generation to follow.
Special thanks to main series sponsor CSKINS and all the other sponsors and supporters: Ocean Frog, Finisterre, Great escape, Alder, Clan skate, St Vedas, Wavegarden Scotland, The Wave Project, Coast2Coast surf school and Momentum surf school.

Thanks also to the local surfers for putting up with us all weekend and all also the staff and management of Pease Bay caravan site.