Gathering of the Clans 2017

Calling all surf clubs and clan chiefs throughout Scotland. The SSF and Tiree Surf club are delighted to be hosting The Gathering of the Clans 2017 – the Scottish Interclub Championships, this year on Tiree.
Rules and information on registering your team will follow. For any urgent queries please contact:
markboydsurf@hotmail.com

Rules:
Each team gets 10 scores, so the team can be made up of 10 separate surfers who compete in one division each, or can be made up of less surfers who compete in multiple divisions to make up 10 scores. We will be aiming for minimum of 8 surfers in a team. The highest possible score would be a team where their surfers place 1st and 2nd in each of the 5 divisions to make up their 10 scores.
Teams must be from an area in Scotland (unless by formal invitation) and are entered via an SSF affiliated surf club however each area/surf club may have multiple teams. Team members do not need to be Scottish but they should be living in Scotland at the time of the event (again unless by formal invitation). Cost to submit a team is £20 (£2 per entry) and each surfer must become a member of the SSF which you can do online prior to the event at http://www.thessf.com/ . Your local surf club may also require you to join their club if you wish to participate in their team.

Where is it?
Ballevulin Beach, Isle of Tiree
When is it?
15-18 September 2017 (competitors are expected to be travelling on 15th & 18th also so these days will not be full days of competition to accommodate)

How does it work?
A team of up to 10 surfers come together to form a Clan. There are 7 divisions that may be contested Open, Junior Boys, Junior Girls, u14s, Ladies, Longboard and Masters. Each team member can compete in a division and receive points for their Clan based on how well they surf against others in their division. The Clan with the most overall points at the end of the event wins the Gathering of the Clans.

What happens if there is no waves?
Tiree has very reliable surfing conditions and the event will run on the dates set. If necessary competition may run on a travel day ie straight off the ferry

Points will be awarded in each division based on the following scoring system: 100pts for 1st, 80 for 2nd, 65 for 3rd, 50 for 4th, 40 for 5th, 30 for 6th, 25 for 7th, 20 for 8th.
How to register:
Clan Chiefs should register teams in advance by emailing: markboydsurf@hotmail.com . Further information will be provided on the registration process in due course. All competitors should ensure their membership is paid via www.thessf.com
If you don’t have a team and would like to compete please contact the SSF who can put you in touch with your local surf club. We want everyone who would like to compete to be able to have a team.
Clan Scoring Example:
A team could be submitted consisting of 6 junior competitors and 4 Open competitors. Through scoring of the event the maximum that team would be able to score would be 660 points(1st– 6thin the juniors + 1st– 4th in the Open = 100 + 80 + 65 + 50 + 40 +30 + 100 + 80 +65 + 50 = 660points). The highest possible scoring for a team would be having 2 competitors in each category scoring the team 900 points (100 + 80 + 100 + 80 + 100 + 80 + 100 + 80 + 100 + 80 = 900).Team managers may also decide to strategically plan their team, for example if they think there will not be as many competitors taking place in say for example the masters event than the openevent (e.g. 3 masters competitors & 20 Open competitors) then they may wish to put more competitors under the masters division with the hope of increasing their chances of scoring morepoints. This competition format allows the Clan Chief to play a critical role in selecting and managing an appropriate team. The success of clans who have won previous events has been down to the strategic planning of a good Clan Chief.
Clan points:
•The Clan Chief will enter the team on the day stating which of their 10 person team competes in which division.
•It is the responsibility of the Clan chiefs to ensure that all those competing in their clan have joined the Scottish Surfing Federation
•If a team has less than 10 then some of their team may compete in more than one division to make up their 10 scorers.
•Minimum team size is 8 people.
•After all entries are taken the contest director will make the draw for the various divisions.
•If a competitor is unable to make their heat without supplying a legitimate reason their clan will be penalised 50 points. (This will be left to the discretion of the competition director.)
•Judges WILL be needed and we encourage those who can help out to do so – ISA qualified judges should take on a head judging role and pass on knowledge to volunteers on the panel
•At least 2 members of each team should be capable and willing to judge. If 2 judges are not made available by each clan the clan will be penalised 50 points.
•There is no limit on the number of competitors a team can enter in any division.
•It is strongly advised that all those coming to the event should bring warm waterproof clothes.
•Entry will be restricted to representatives from a Scottish Area unless by formal invite from the Scottish Surfing Federation, in other words it is understandable that some teams, in particular university teams, may put forward some competitors representing their area that are not Scottish by descent. This is of course accepted however these competitors should be capable of proving that they are currently residing in Scotland and are affiliated with their local surf club (e.g. Kelly Slater, should he wish to enter, would have to prove he is a student at a Scottish University or living in Scotland and a member of his local SSF affiliated surf club). The purpose of Gathering of the Clans is get as much Scottish surfers together as possible and it is important to ensure that people are not put off going to the competition if they don’t think they can get a team together. We will do our best to cater for this, it may involve tweaking the competition to suit on the day and this may be through having a few teams made up of surfers from across Scotland.

The SSF AGM will also be taking place on Friday the 15th of September at the GOTC at 1900hrs near Balevulin Beach.
Hope to see you there! 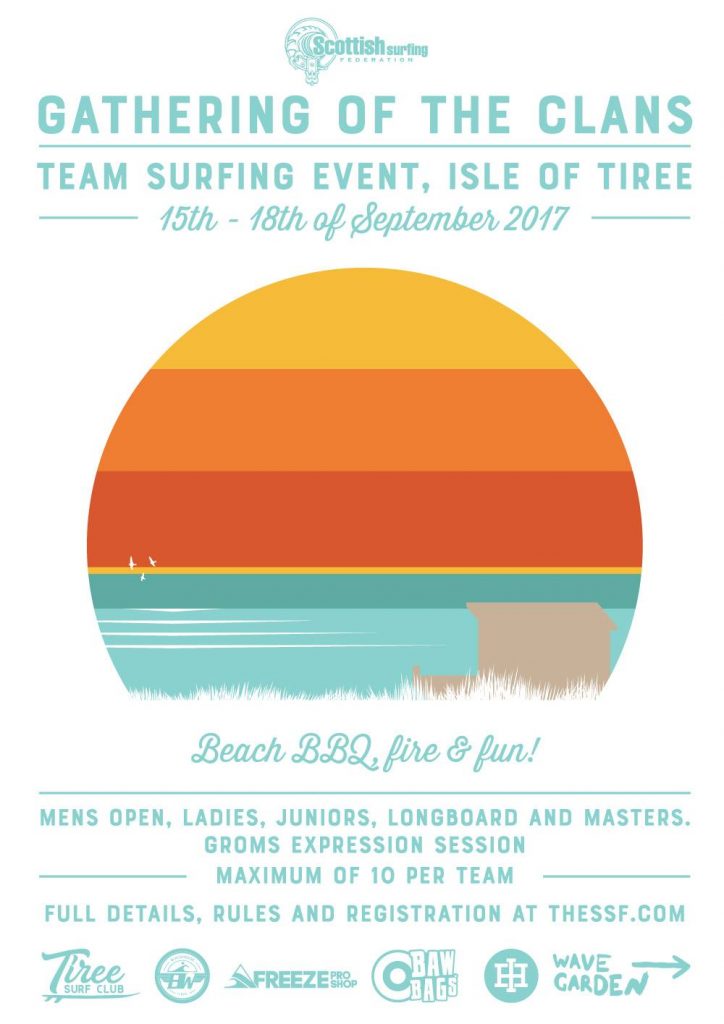