On the Environmental front the SSF has had a diverse range of input from helping promote and organizing local beach clean ups across the national support for UV treatment to address pollution issues. More recently the focus has been on consultation as main stakeholders for the planning of marine onshore and offshore developments within Scottish seas. 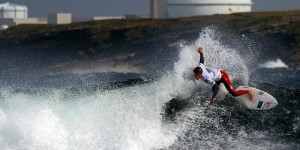 As the sport of surfing has grown it now finds it is competing in demand for the use of Scotland’s Seas with the fishing, oil and gas and new renewable sectors. The Marine Renewables sector (Offshore Wind, Tidal and Marine) began to take shape with ambitious plans ahead and the ‘Crown estate’ releasing blocks around Scotland’s Coasts for Marine Renewable Development.

The scale of the Scottish Marine Renewable Sector is massive with billions of pounds of investment forecast in the next few years. The renewable sector is fundamentally set to change the shape of Scotland’s Marine Environment.

To date the SSF have worked with groups of surfers and developers alike on the north coast as well as the Scottish Isles to ensure the interests of Scottish Surfers are well represented and new developments have limited impact on the current surf environment.

To raise awareness the SSF have created a series of documents the first one aimed at surfers to give them an understanding of the scale of Scottish Surfing.

Surfing and the future of Scotlands Seas

The second to give potential developers an awareness of the surf environment and why the Scottish Surfers are passionate about safeguarding it.

Where practical the SSF aims to offer a bridge between local Scottish surf communities and potential developers through early engagement to ensure solutions can be found in how all can share the coastline effectively together.