The home nation surfing bodies for Wales, Scotland, England and the Channel Islands are excited for this year’s British Surfing Championships & British Cup which will this time round be hosted by the SSF in Thurso, Scotland for the first time since the 1980’s.

The British Surfing Championships & British Cup event mirrors the  format of the ISA World Surfing Games, with each nation’s surfers competing for both individual surfer titles as well as a home nations team title (the British Cup).

Athletes should be made aware of an update to the British Surf Championship rules.

Whereas previously qualification to the British Championships was solely reserved to the finalists of the home nation championship, the rules have been updated to enable the provision for each home nation to submit a single wildcard in each category.

Qualification for the British Championships is through the English, Scottish, Channel Islands or Welsh nationals;

From the 4 places available from each home nation – the first 3 places from the home nation national championships automatically qualify for the 1st, 2nd and 3rd place respectfully.

The 4th place position can be a wildcard, selected by the home nation federation, on the premise the wildcard meets the respective eligibility criteria.

Should any of these 4 athletes be unavailable the next highest placegetter (highest heat total used to split = placings) from the national championships will then be offered the position (and so on and so forth counting back through the last national championship rankings).

Qualification for the event will be given to 16 surfers in each division, made up of 4 surfers in each division from each home nation. For example, the Men’s Open will comprise of 4 from Wales, 4 from Scotland, 4 from Channel Islands and 4 from England., making up the 16 man draw. The country code of each surfer will be used to identify their representation (WAL, SCO, CIS & ENG). Each surfer will be vying for the British Champion individual title, whilst points for finished placing at the event will be given to each surfer and combined to identify a home nations British Cup team champion.

Qualification to the British Surfing Championships & British Cup in Thurso, Scotland on the 18th and 19th of April 2020 is via either the:

The following athletes from each home nation championship can qualify:

in the following divisions:

The event will provide a high level competition platform, which in turn will drive standards of the surfers and judging and officiating levels across the home nations with each country having representation on the judging panel. The event also provides an opportunity for the nations to introduce and gain experience in any international competition developments and results will be used to select a British Team for Olympic Qualifying Events.

The event schedule is as follows;

For further information on the event in surfers can contact their respective surfing governing body. 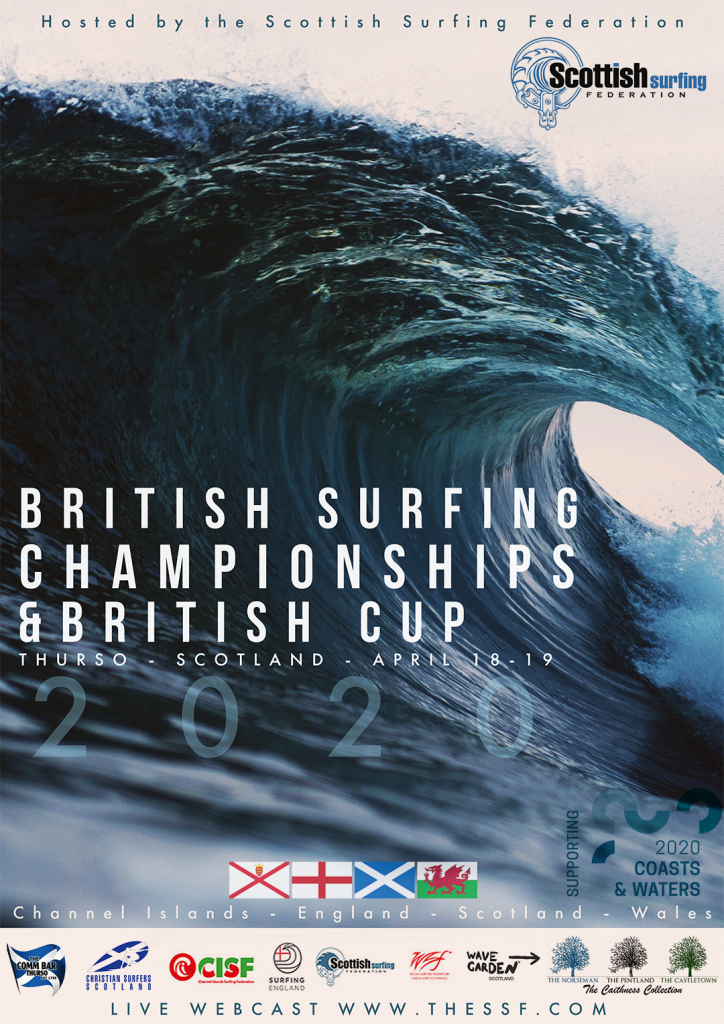