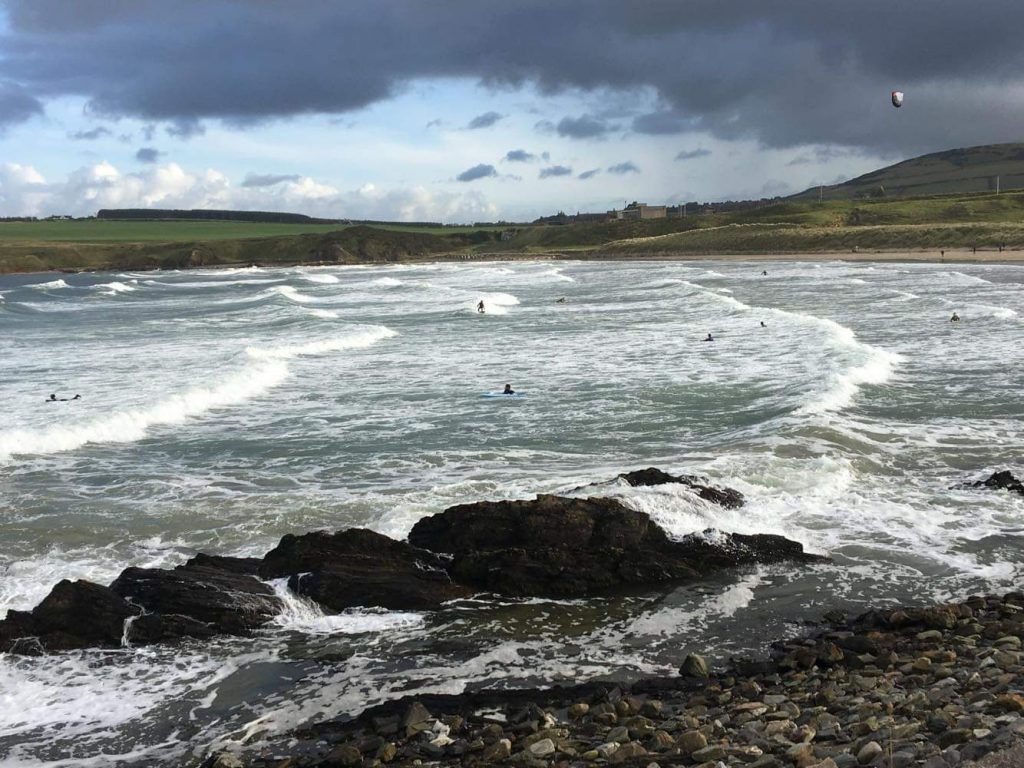 The competition started early on a blustery day at Sandend. Thankfully we had a few shelters, including a bell tent complete with wood-burning stove, as well as Andy with Coffee at the Kings in his airstream caravan to supply a much-needed caffeine boost – especially for the early risers there to help set up. Despite the onshore wind, there were plenty of head-high wedgy peaks, as well as lots of powerful white water to allow for a great day of surfing competition for all ages and abilities.

A strong contingent of Scotland’s youngest surfers made the journey and were eager to get in the Moray Firth surf. With such a good turnout we needed a fast turnaround between the 15 minute heats but the continuous action helped to keep everybody warm. The judging panel and spotters had their work cut out trying to identify surfers on the lower tide and bright morning light but fortunately it got easier as the tide came up.

In the under 14 mixed class it was great to see so many entering their first competition and really going for it in the tough conditions. There were strong performances throughout, but in the end most of the seasoned vets made it to the final. Consistently posting the highest heat totals and coming first in every heat, the win was convincingly secured by Thurso’s Craig MacLachlan of the North Shore Surf Club with an 8 point ride backed up by a by a 6. Sandend local, Natalie Kobedza, of the Moray Firth Surf Riders club, surfed incredibly well and even lead the first half of the final. Opting not to free surf between heats proved a wise move as she had the energy to paddle further out enabling her to select the best peeling waves to take 2nd place with 7.5 points. Craig and Natalie only caught 4 waves each in the final proving that wave selection was key. In 3rd was her younger brother, Ben Kobedza, who surfed consistently well all day but seemed to be running out of steam by the end. Another local from the same club, Luca Baltrunas surfed his way to a well-earned 4th spot. 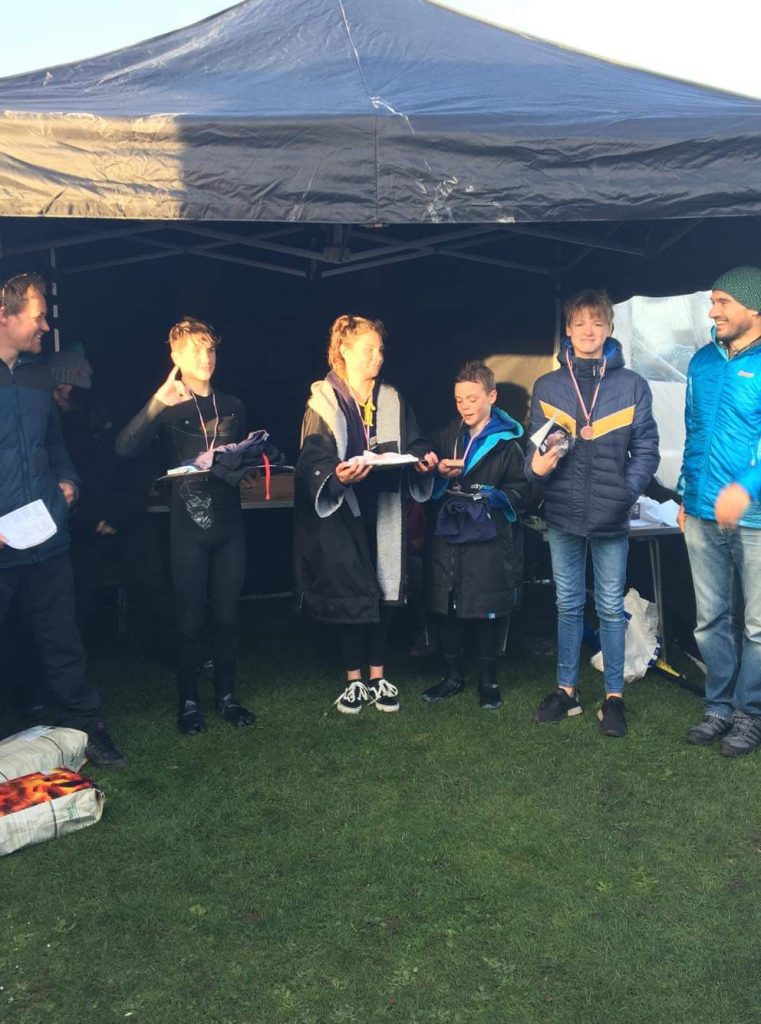 11 females vied for the under 18 girl’s title, ranging from age 7 to 14 – having so many good younger surfers bodes well for the future of girls surfing in Scotland. In a very close final, up-and-coming talent Nadia Murray of the North Shore Surf Club placed 4th and seemed to be improving with every round. The same could be said of Annie Herd who got 3rd in her first ever surf competition. Maja Thomson managed to complete some of her manoeuvres to increase her scores and push for the top spot but Natalie Kobedza backed up her earlier performance with confident surfing on bigger set waves to clinch the win. 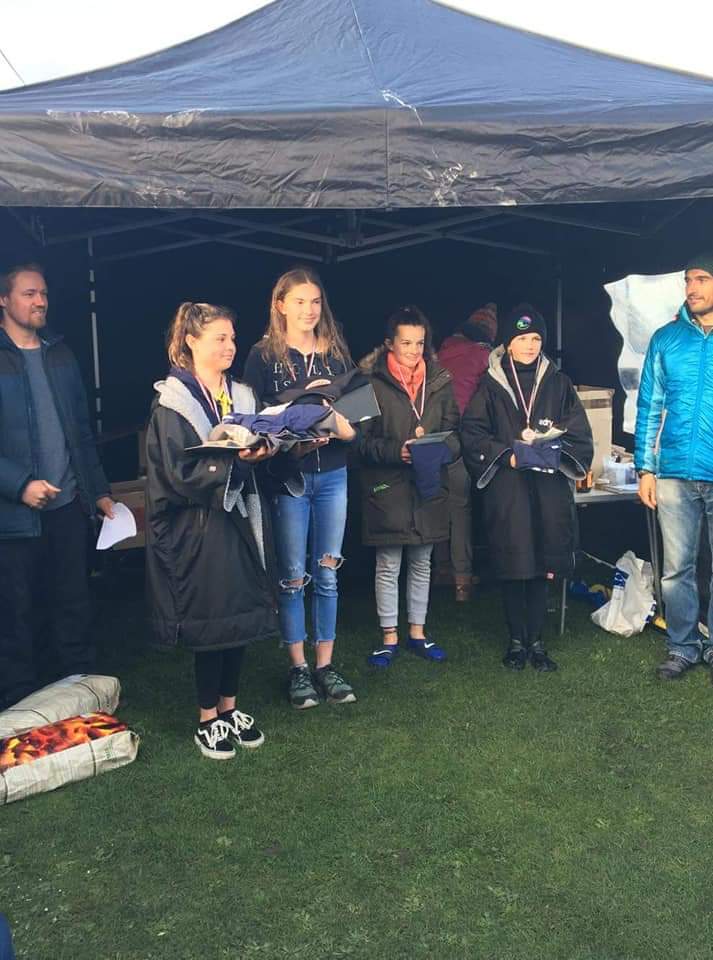 The last event was the Under 18 boy’s division with 14 surfers entering. The standard in the final was higher than ever with great performances throughout the rounds. Euan Lee of Lossie Surf Club did well to longboard his way to 4th place but the manoeuvrability of the short-boarders took the top spots. A very weary Ben Kobedza placed 3rd with some well-chosen inside waves. St Andrew’s ripper, Tomas Badia, gave a smooth performance to take the 2nd place. There was no surprise that top spot went to Craig MacLachlan. His excellent 8 point single wave score was too strong for the other surfers and, with a decent back up score as well, he thoroughly deserved the victory. 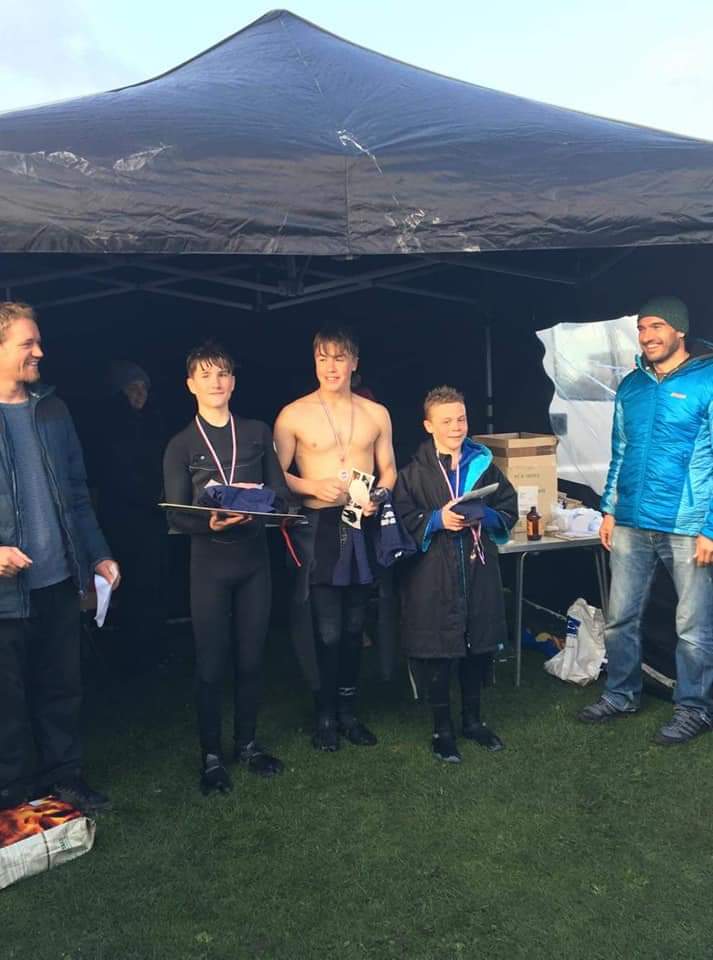 The micro groms were keen to enter the water for an Expression Session during the lunch break. 3 year old Ava Sutherland had eyes on the prizes and was duly awarded for some dad-assisted waves. It was also great to see competitors carrying on free-surfing after their competition had ended and the judging panel was frequently impressed with the tenacity of Riley Whyte and Ben Barclay-Evely who seemed to spend all day in the water – ones to watch for the future!

The results are below and these go towards the SSF Junior Series. It’s still all to play for at the final series event of 2019 – The Gathering of the Clans club competition which takes place at Fraserburgh on the 2nd & 3rd of November. Please enquire with your club about entering.

We must thank our sponsors – Lossie Childcare Centre, Alder, C-Skins, New Wave Surf School and Suds Surf School. Everybody appreciated the hot drinks and treats from Coffee at the Kings to keep us warm and toasty – thank you, Andy! A huge thanks must go to all of the volunteers who gave up their time to help ensure the competition ran smoothly and was enjoyed by everybody. Finally, thank you to all the competitors and parents for making such an enjoyable competition! See you at the next one!