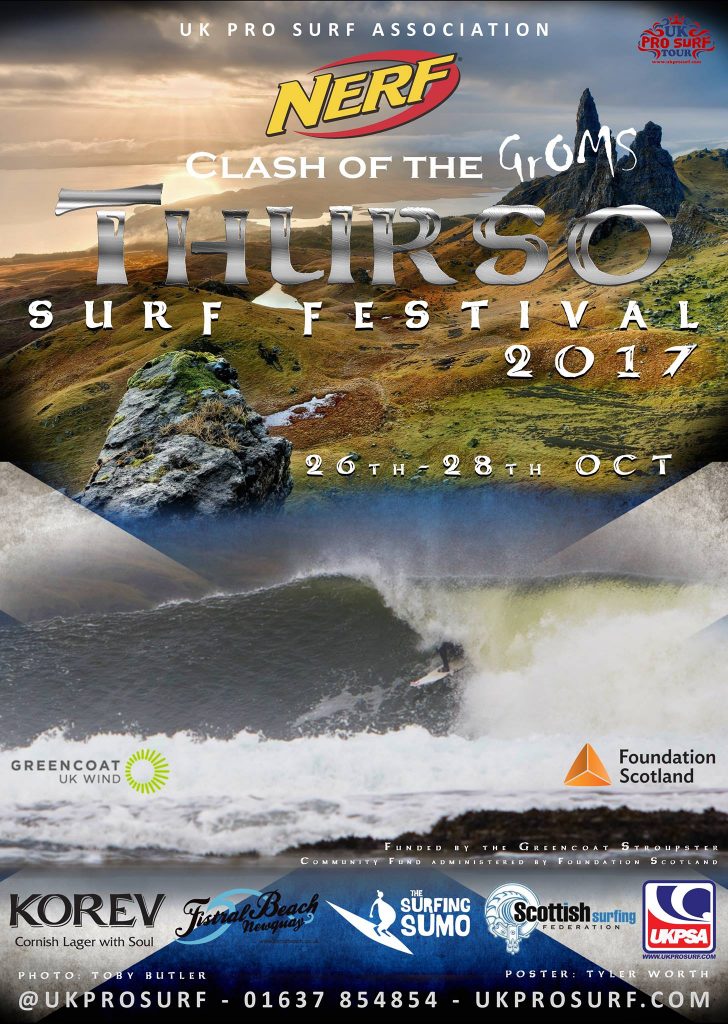 The UK Pro Surf Tour will again return to Scotland this autumn with the Thurso leg of the tour taking place from the 26th-28th of October.  This year more junior divisions have been added to the event with the aim of progressing junior development.  There was great success last year from Scottish athletes with Andrew Robertson (SCO) making the final of the U18 Boys and Mark Boyd (SCO) making it all the way to the final of the Open Mens division.  This year, with the addition of the new junior categories the SSF are optimistic for more success in younger age groups too with on form surfers such as Craig McLachlan (SCO), Iona McLachlan (SCO), Finn MacDonald (SCO), Clover Christopherson (SCO) and Emma Swanson (SCO) all being awarded SSF wildcards for their results in the Scottish Nationals.  Scottish U18 champ Ben Larg (SCO) will have just returned from the ISA World Juniors and will be looking to do well in not only the U18 boys but also U16, U14 and U12!  Also watch out in the Open Women with 2017 Scottish and Nordic Women’s champion Megan MacKay (SCO) and her fellow EuroSurf team-mate Phoebe Strachan (SCO) looking to cause upset.
Below are a list of SSF wildcards into the event.  These surfers will receive free entry into the event.  Anyone who will not be using their wildcard must contact the SSF ASAP.  SSF members who wish to enter the event will not be required to join the UKPSA to compete and must contact the SSF to put their entry in.
OPEN MEN
George Watt
Mark Boyd
OPEN WOMEN
Megan MacKay
Phoebe Strachan
U18 BOYS
Ben Larg
U18 GIRLS
Iona MacLachlan
U16 BOYS
Finn MacDonald
U16 GIRLS
Clover Christopherson
U14 BOYS
Craig MacLachlan
U14 GIRLS
Lia Harris
U12 OPEN
Craig MacLachlan