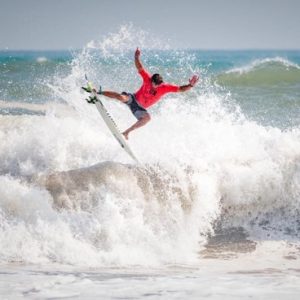 Today, UK Sport have announced that the sport of surfing will receive up to 192,500 GBP as part of the Aspiration Fund in support of preparation for the Tokyo 2020 Olympics.

The Aspiration Fund application submitted on behalf of BSURF (the collaboration of the 4 surfing governing bodies) will be used to support the elite athletes in their qualification for the games and the delivery of a social impact plan to maximize the benefit from the games across Britain.

In 2016 the member nations of the Olympic Movement voted in favor of the inclusion of the sport of Surfing in the Tokyo Olympic Games 2020.  Surfing was one of five new sports to be included and provides a platform for British surfing to excel on the world stage.

Over recent years each of the Federations have gone from strength to strength; managing their own programmes and teams at European and World Championship level. With the prospect of Surfing entering the Olympics, an event which requires British Team participation, the Federations representing each jurisdiction formed the British Surfing Union of Recognised Federations (‘BSURF’) collaboration agreement.  As well as framing how the governing bodies will come together to select, prepare and manage a British team when required, the BSURF agreement offers each home nation a framework for collaboration and mutual support. In the last two years BSURF have been recognized by the British Olympic Association and the International Surfing Association.

For the sport of surfing, these are very exciting times, and the team now embark on a journey to build an effective strategy and development plan that will prepare British athletes for the world stage in readiness for the Olympic Games 2020.