The Gathering of the Clans (Scottish Inter-Club Surfing Championships) 2017 finals day took place on Sunday the 17th of September at Balephuil beach on the Isle of Tiree, Scotland under glorious sunshine.

4 Teams from all over Scotland would compete in 7 divisions for the Clans Sword Trophy they were:

1-2ft glassy waves were on offer. First up was the Open Womens division which was won convincingly by Iona McLachlan (NS). The under 14s was one of the most competitive categories and Scottish U14 champion Craig McLachlan (NS) (brother of Iona) would be the eventual winner, despite the lead changing several times over the course of the exciting final heat between Craig and 2nd place Ben Larg (TSC).   There would be another victory for the McLachlan family once again in the U18 girls division with Iona doing the double and putting the North of Scotland team into the lead in the team rankings. This year the North of Scotland team was an amalgamation of both the North Shore Surf Club (defending champions) and the Moray Firth Surf Riders making them strong contenders and hopefuls for retaining the title in the North. This lead was extended when Mark Boyd (NS) placed 1st in the Longboard category. Tiree Surf Club would bounce back into contention however with a strong performance in the U18 Boys from both Finn MacDonald (TSC) and current Scottish U18 champion, 12 year old Ben Larg (TSC) who took 1st and 2nd places respectively. Finn displayed some fantastic power surfing with wraps back into the pocket to take the win posting a 7pt and 5pt ride. There was no surprise in the Masters division with a win from an on form Craig Sutherland who proved all day long that age is just a number – seamless flowing backhand Brazillian style window wipers were earning Suds high scores in early rounds of both the Masters and Open divisions. Craig would do more than enough for victory in the Masters but would come up just short in the Open with a 4th place finish. The young guns Finn MacDonald (TSC) and 2015 Gathering of the Clans Open division winner Andrew Robertson (TSC) were standouts all day long in the small clean surf displaying a very high level of technical, flowing and powerful surfing and a great variety of maneuvers.  The quarter final heat between Andrew and Finn was a highlight of the day with Andrew taking an early lead with a 7.5pt wave for some critical turns throwing spray on a left-hander. Finn would answer back with a 5pt ride to put himself back in contention. Both surfers would find a 4.5pt left to back up Andrew’s higher scoring ride at the start of the heat being the deciding factor. The surfing on display in the weak small surf was inspiring to watch and the future of Scottish surfing is in good hands – the present of Scottish surfing even because both Andrew and Finn would progress through the semis and in the final to take on the experience of Mark Boyd (NS) and Craig Sutherland (NS). The eventual outcome would be a repeat of the 2015 GOTC with Robertson getting the win just ahead of Boyd but the final was certainly no disappointment. Small running lefts were once again on order with the Tiree Boys making the most of them on their puddle jumper surfboards. Suds had also opted for the same equipment but couldn’t manage the scores he had in earlier rounds for 4th. Finn MacDonald (TSC) would get really busy in this final catching 11 waves but could only manage a heat total of 10.2pts not enough to defend his GOTC open division title. Andrew Robertson (TSC) would post the only excellent score of the final with an 8pt ride on his 4th wave. Boyd, who placed 2nd at the Scottish Nationals earlier this year came up just short of this with a 7.5pt ride on another left. Andrew backed up his score with a 7pt ride while Boyd remained patient waiting for another set. Boyd’s last wave came out at a 6.5 which wouldn’t be enough leaving him with another 2nd place finish to add to his string of 2nd place finishes and a well deserved win for young Andrew Robertson (TSC) who really excelled in the conditions with a finely tuned forehand attack. The 1st and 3rd place finishes for TSC in the Open division wouldn’t be enough for Tiree Surf Club in the overall team rankings who would come 2nd behind the North of Scotland who finished 100pts ahead. Edinburgh and Borders Surf Club and Tiree 2 would finish 3rd and 4th respectively.

The Scottish Surfing Federation would like to thank Tiree Surf Club for hosting the event and all the event sponsors; Blackhouse Watersports, Roxy, Baw Bags, Hasta Inc, Wavegarden Scotland and Freeze Pro Shop for the fantastic prizes. Also a huge congratulations to all the kids from Tiree Surf Club who took part in the groms expression session – there were more than a few smiling faces and undoubtedly a few future Scottish champions getting hooked on the sport yesterday. 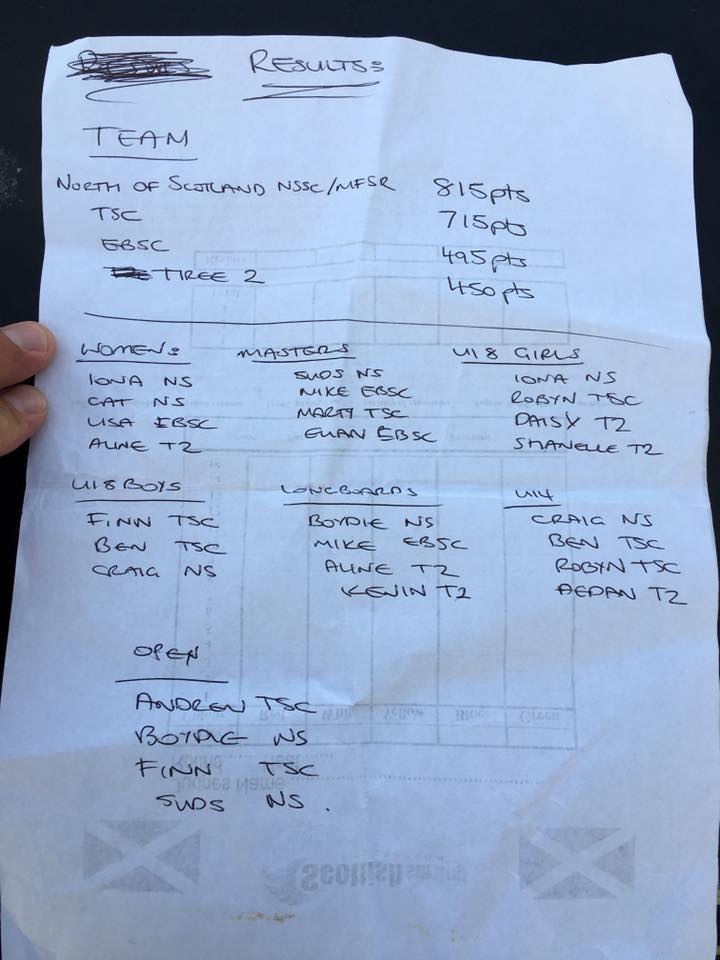