The UK Pro Surf Tour is set to return to Scotland at the end of this month with the annual Thurso leg of the tour.  The event will take place from the 27th to 30th of October 2016 and is once again sanctioned by the Scottish Surfing Federation and free wildcard entry has been granted to top Scottish surfers.  The SSF wildcards have been allocated as follows: 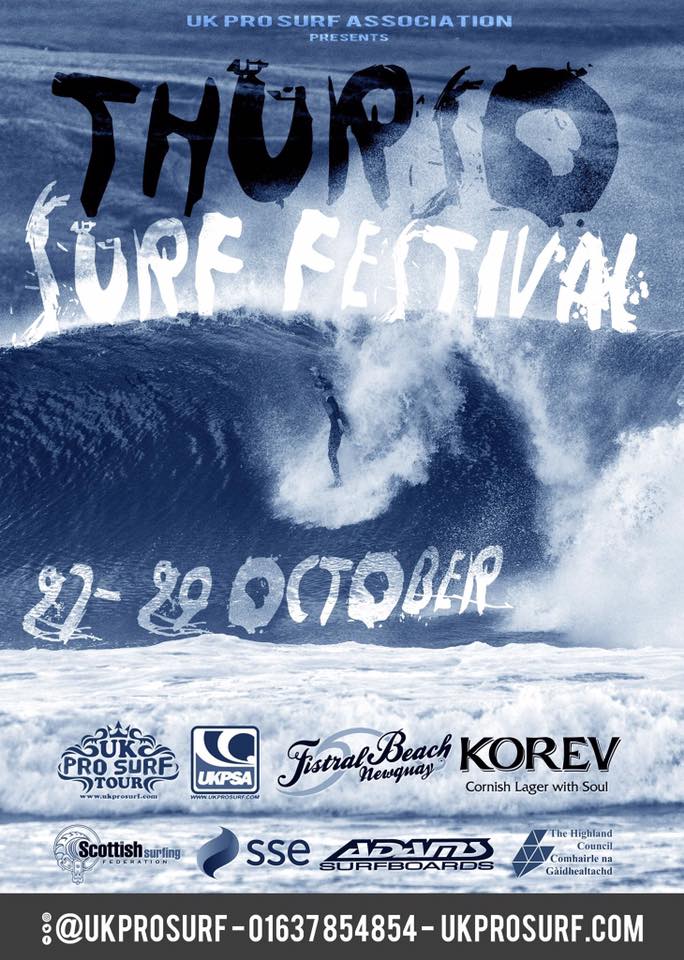 Current Scottish Champion, Mark Cameron, gladly receives one of the Men’s Open Wildcards after being unable to compete in the UK Pro Tour event in Thurso last year due to work commitments.

Thurso’s Mark Boyd, current Scottish no.2, will once again receive a wildcard into the UKPST event.  Last year Mark was the highest placed Scottish surfer in the Thurso UKPST event, making it through 3 rounds of the event in total (2 rounds at Thurso-East and 1 round at the Brims Ness Bowl) narrowly missing out on a place in the final by less than 1 point finishing a respectable 5th overall.  Mark will be hungry to improve on last year’s result.

Current Scottish no.3, Thurso’s Scott Main will be unable to compete due to work commitments therefore the 3rd Men’s Open wildcard will be given to Thurso-East specialist Chris Noble and the 4th to Dunnet Goofy footer Chris Clarke.

In the ladies division the wildcards have been given to Shoana Blackadder of Thurso and Iona McLachlan of Murkle.  Iona will be eager to get back in a rashie after recently competing at the ISA World Juniors in the Azores.

In the junior divisions Andrew Robertson will be competing in the Under 18s division along with current Scottish U18 Champion Finn MacDonald.  Finn is also coming off a win at the ‘Gathering of the Clans’ (Scottish Inter-Club Championships) therefore will be going into the event with confidence.  Finn will also take a spot in the U16 Boys division along with Ben Larg.  Finn, Ben, Andrew and Iona were all representing Scotland at the ISA World Juniors and 11 year old Ben progressed further in the worlds than any of his team-mates and will be one to watch at the UKPST in Thurso and all of these juniors will be taking the experience and lessons learned from their heats at the worlds into this event.

William Watson SSF president commented on the competition returning to Thurso saying;
“We are once again welcoming the UK Pro Surfing Association’s event back to Scotland.  We see the event as a fantastic opportunity for Scotland’s best surfers to test themselves against the best surfers from across the UK.  The event is also another opportunity for some of our SSF judges to further their experience and skills.  In addition, the competition is a great spectacle for the town and for our grommets to watch and aspire to“